People say fairytale are just for kids, but when they happen in real life, everyone feels the magic. Recently, English musician Tinie Tempah and photographer and singer Ty Bello were doing a photoshoot in Nigeria when they were accidentally photo-bombed by a bread seller. The catch? The photo was perfect, and Bello was enchanted.

“Who is she? Every one has been asking if this lady is a model… It was just perfect coincidence,” wrote Bello on Instagram. The search was on. 27-year-old Olajumoke Orisaguna, mother of two, was eventually found, but the story doesn’t end there. With Bello’s help, she scored a modeling contract, and was just featured on the cover of This Day Style!

The photographer wanted to find her, but didn’t know who she was

The photographer wanted to find her, but didn’t know who she was

Then, on February 4th, he finally found her

“Meeting and photographing her has inspired us all”

Just days later, Orisaguna was on the cover of this magazine!

Beautiful Nollywood actress and mother of 1, UCHE OGBODO, is so excited for winning an award for Fashion Icon of the Year, at the just concluded 2015 Fashion Icon Awards which was held in Lagos. Uche Ogbodo took to Instagram to celebrate her award, when she posted the following: Oh Yeah! I Won! 👯 The Fashion Icon Of the Year Award @ the just Concluded Fashion Icon Awards Last Night ! All thanks To My Friend & Stylist CEO Of ZB Collections @zbcollections , You have been More than a friend to Me! Love u loads ❤ #IloveFashion #queening👑 #SuperStar #fashionista #iwearmyheartonmysleeve #goddess #GodOverFame .. @mcshakara @makanicouture –UCHE OGBODO – See more at: http://www.nollywoodsocial.com/photo/1094#sthash.tcUbi9cA.dpuf

Held every year in a sacred forest on the outskirts of the southern Nigerian city of Osogbo, the Osun-Osogbo Festival is a two-week-long celebration of the Yoruba river goddess Oshun. The festival, which begins with a traditional cleansing of the town (Iwopopo) and ends in a procession of the people to the Osun-Osogbo sacred grove, attracts attendees from all over the globe.

Among those in attendance this year were Adebayo Adegbembo of the Lagos-based startup Genii Games Limited, and Nigerian street photographer Ife Martins. Together, they set out to document the festival’s worshippers, spectators and tourists alike. “Our objective was inspired by the need to communicate its essence to ordinary people whose interpretation of African traditional festivals and people associated with them is something diabolic and fearful,” Adegbembo told Okayafrica. They began their coverage on Isese Day, a day set aside for traditional worshippers to parade and showcase their faith to the public, and continued the following day during the festival’s grand finale, in which they joined the crowd at the Ataoja Palace in Osogbo waiting for the emergence of the Arugba (votary maid).

Adegbembo elaborated on the festival’s significance in an email to Okayafrica:

“Year after year, the festival receives significant attention from the media to actual worshippers, tourists and spectators. My dad covered the same festival in the early nineties and spoke of a low turnout dominated by local indigenes. However, the festival has since grown to international status in recent years, a possible effect of Susanne Wenger’s works and recognition of the Osun-Osogbo grove as a UNESCO heritage site in 2005. Today, the festival enjoys tremendous support from the government and private sponsors also jostle to liven the annual celebration.

For all that’s said about the declining fate of our indigenous cultures, the Osun-Osogbo Festival gives hope. Its continuous embrace centuries on by the people – old, young, far and wide, worshippers and spectators alike – is further testament to its significance.”

Take a look at the 2015 Osun-Osogbo Festival photographed by Ife Martins in the gallery above. For more, read Adegbembo’s full festival coverage here.

Adebayo Adegbembo is the founder and lead programmer at Genii Games Limited, a Nigerian start-up focused on the development of interactive mobile apps, videos and games around African cultural elements for kids. Follow him on Twitter at@technobayo.

How to Tie a Headwrap

Head wraps have been part of Africans history for centuries, which dates back to the 1700’s.   Our ancestors wore head wraps during slavery times and they were also recognized as turbans.  Head wraps were an indication of poverty and subordination towards their masters. The masters would even distribute additional handkerchiefs so that the female slaves could use them as head coverings.  There were specific destinations in the South that it was mandatory that female slaves wrap their heads. I remember my late maternal grandmother who had extremely long beautiful hair use to wear head wraps and turbans to protect her hair from gathering dust, she use to tell me stories that she would wear them while they were working in the cotton fields picking cotton. In Africa, seeing a woman in head covering is a common thing that has spread for many generations compared to America when you see black women in head coverings it is mostly as a stylish trend, form of fashion or a Muslim tradition.

Head wraps have different names in Africa, if you are Nigerian head wraps are known as “gele” (pronounced gaye lay), which are recognized in Nigeria (West Africa).

To compliment, the African attire Nigerian women accessorize their head covering with a coordinating gele, which really brings the outfit out to give it a finishing touch.  Most women wear the Gele while attending a special event, wake-keeping (observance of the death of love one), wedding, graduations, etc…

In the Yoruba tribe traditionally you can determine a woman’s marital status by the way her Gele is tied on her head. If the end of the Gele is facing towards the right it means she is married and if goes towards the left means she is unattached.

Gele can be extremely beautiful and can be very unique depending on the way that it is tied and wrapped around the crown of the head.

The first time I had a Gele tied was at an International show at a Bishop T. D. Jakes  “Woman Thou Art Loose” Conference it was the most unique feeling that I had experienced to be a part of my ancestor’s traditions.

Selecting the Proper Fabric for Your Gele

When you are planning on using a gele you must select the appropriate fabric depending on if it is for an everyday occasion or a formal event.  Gele’s come in a variety of fabrics, brocade, damask and “aso-oke”. A majority of women in Nigeria love to use the metallic fabrics which are constructed from jacquard which was named after the inventor Joseph Marie Jacquard (1752-1834).  This structure is a vital tool in weaving.  The phrase “Jacquard” is not directed to a certain type of loom, but points to the force structure that converts to automatic operation of the patterning. This method can also be utilized in the construction of jerseys, machine knitted cloths and knits.

In South African & Namibia they recognize the traditional head cloth is referred to as “doek” which means cloth, which is mostly used among the elderly women in rural areas.  In other parts of Africa such as Ghana & Malawi head coverings are recognized as “duku” and Zimbabwe recognize “dhuku” and Botswana recognize “tukwi” as their head coverings.

In Ghana most women wear a “duku” on a spiritual occasion which falls on a Friday-Sunday depending on what denomination they are serving. 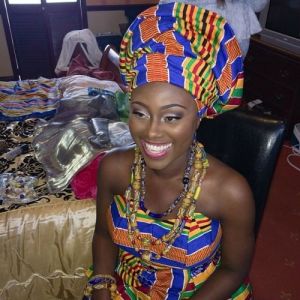 Women in Malawi usually tie their head ties in small and more conservative styles rather than the ones the women in Nigeria who tie theirs in downwards when attending funerals but they are worn upwards when attending more formal occasions like weddings, ceremonies and formal parties, they are also worn to protect their hair at night when sleep so it does not get their hair out of form.

In the Southern part of Africa some women may be seen wearing white “dukus” to cover their heads. In some of the Pentecostal churches in South Africa women who are married wear white “dukus”.

In Zimbabwe the Shangaan women accessorize wearing “dukus”. You may see some women in